In celebration I’m taking friends out to watch the remainder of the Leonid Meteor Shower tonight! 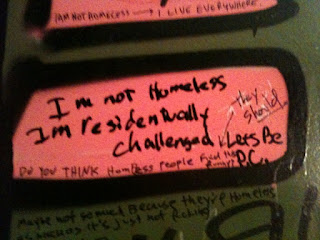 I should've renamed my Homeless Experiment the "Residentially
Challenged" Experiment! 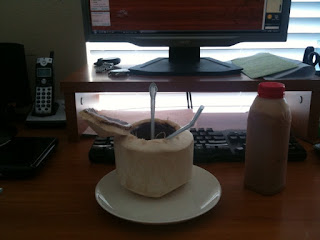 Something people find rather interesting is when they hear about my Homeless Experiment. Usually they hear it from one of my jackass friends mentioning to someone “Ask him where he lived this year!” or some question-inducing comment like that.

People generally want to read the experiment, but since it’s in blog format, it’s in reverse order and in general kind of hard to read.
People can always go to the NevBlog Timeline, scroll to the experiment and click through each post…however this requires first KNOWING you can do that, and a full 39 clicks to read!
A better way to read was needed so now the Homeless Experiment is now viewable in several different formats.
———–
GETTING THESE POSTED:
Putting the actual file together took the most time. I copy/pasted all the files in chronological order into a Word file then corrected all the wonky formatting.
The Word to HTML conversion gave even more “interesting” formatting errors, but a straight copy/paste from Word into Frontpage worked great. I turned this page into the HTML version of the ebook.
For the PDF I simply converted the HTML document into a PDF.
I figured getting this uploaded on the Amazon Kindle platform would be difficult, but it was actually unbelievably simple. This is quite possibly the simplest method to “publish” anything.
Anyone with an Amazon account is ready to go, enter a few book details, upload the file in pretty much any format and within a few seconds you have a preview: I quickly made a cheesy book cover and uploaded that: ….set the price and you’re published! Wait a few days for approval and it’ll be on sale. 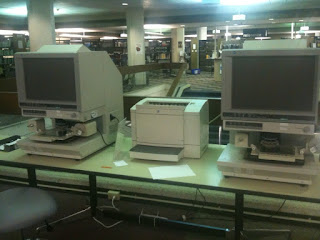 Hahaha… I never noticed that where I sit in the library to read
magazines are two "state of the art" microfiche machines!

I wonder if anyone still uses them…

Just out of pure curiosity I decided to visit a county foreclosure auction. I always hear about people buying property at a foreclosure auctions, so at 10am this Tuesday I went to the Travis County (Austin, TX.) auction which is held outside at the courthouse.

Beforehand I checked out the properties to get a general gist of what’s on the auction block. The auction I went to was for November 2009. Pretty much everything looked like crap to me, I’m not sure why anyone would want some of these properties, and many of them went unsold (aka “Struck Off”). Most of the listings with pictures looked like 100 year old shacks that might collapse at any moment….a far cry from the palaces going for $1,000 you see on TV. Many of the listings were just for plots of land, some of these plots sold for WAY over the minimum auction price, which probably means certain people know that area well and came prepared.

Keep in mind if you buy a listing, it almost always has some “back taxes” the former owner couldn’t pay, so you take on those debts.

As I arrived I saw a crowd of about 80 or 100 people from all walks of life crowded around a police officer and some office workers on an elevated area of the steps: I got there right when it started, and was kind of disappointed the auctioneer DIDN’TSPEAKINTHATREALLYFASTWAY.

The man doing the auctioning was dressed like a state trooper, and was rather soft spoken, and was a little difficult to hear if you weren’t paying attention. One guy involved in a bid war kept looking down at his notes, and actually won the listing and didn’t know because he couldn’t hear! HA! The whole thing was maybe 20 minutes long and was actually pretty….fun! It was comical watching people bid against each other and rather entertaining for the crowd. There was a woman at the front and a man in the back who obviously knew each other from these auctions who kept bidding against each other on almost every listing.

The crowd was very entertained watching them outbid each other to 2X, 3X, 4X and even 5X the minimum property value! Everyone was thinking “If these two just came on different days they could’ve saved $100,000 at this auction alone!”

I spoke with some people who come frequently, and sometimes there are great bargains to be picked up, but on a crowded day like today it’s difficult to buy popular listings for cheap. You also have to register to bid, which means you have to prove you have a certain amount of cash ready to plunk down….this keeps out much of the general public.

I’m sure a slowing economy will start adding some even greater bargains to these auctions.