This is an idea for the “unique work scenario parties” I enjoy (kind like this Reading Party)!

I held a “Rock Climb & Work & Laptop & Horse Around Day” this past Wednesday.

All it took was a small Facebook invite I made in 5 minutes: I bought $49 worth of goodies for everyone (people barely touched ANYTHING except the clementines, so it was total overkill): These events are AWESOME ways to co-work with people whilst having fun at the same time.

Feel free to copy this with your friend circle!
Sincerely,
Neville

Of all the interviews this is my favorite title :-) It goes through how I started businesses in high school, college, and after.

You can listen to it here:
https://mywifequitherjob.com/mwhqj-003-how-neville-medhora-makes-6-figures-selling-copywriting-courses-online/

You sit down to do work, you start, then you don’t FINISH!

This is common.  And there’s a mentality you can learn to help with this.  Let’s solve this problem by citing some examples:

SITTING AT THE COMPUTER EXAMPLE:
Everyone can relate to sitting down to finish something like writing a paper, doing homework, clearing out email, whatever…..and then never finishing it through all the way.

Here’s my estimate of the breakdown:

Of those people, guess who’s REALLY going places?  Yup…..that 5% of top performers that can start and follow through and do it well.

So when you start something, then start getting distracted, it’s useful to think in your head in an INSANE and AGGRESSIVE sounding voice “THIS RIGHT HERE IS THE DIFFERENCE BETWEEN ME AND ALL THE LAZY SCHMUCKS OUT THERE  I AM WILLING TO PUT THE WORK IN THAT EVERYONE ELSE IS NOT  AND BECAUSE OF THIS I WILL BE SUCCESSFUL AND THEY WILL NOT     >:-)  >:-O    >:-)  !!!!!!!!!!!!”

This is the killer instinct that will push you through to finish a task, and not stop halfway through like 80% of other people.

Video example of the attitude to have:

Will Smith willing to DIE on a treadmill to beat the other person.
https://www.youtube.com/watch?v=doqS35FfcUE

AT THE GYM EXAMPLE:
The biggest realization I had when I started seeing muscle gains from my workouts was that it’s NOT UNTIL YOU’RE IN PAIN that the growth happens.

I’ve been going to this “YoStrong” class at the yoga studio across the street.  It’s like the end result of a yoga class having sex with a weight training class.

In the class they inevitably work your muscles till failure.  And of course right before your muscles can literally do no more…..they hurt and ache.

In the past I would just stop and take a rest at that point.

But I’ve started gaining more muscle due to one mindset trick:
When the exercise starts to hurt, instead of wincing or stopping…..I get this maniacal look on my face, and in my brain I start thinking: “FUCK YOU EXERCISE I WILL BEAT YOU I WILL KILL YOU I WILL WIN I PAID MONEY TO COME TO THIS CLASS AND GET MY ASS KICKED NOT REST AND I WILL KEEP GOING FOREVER   >:-)  >:-O    >:-)  !!!!!!!!!!!!”

But this totally works, and makes me embrace that pain.  Because I know that 1% of the time I’m in pain, is where 90% of the muscle gains come from!

Instead of “working through the pain” Arnold is enjoying the hell out of it.  No wonder he won so many championships!

This will help you develop your killer instinct.

Hey, I was trying to think of some clever-ass April Fools joke…..but I stumbled across a joke that’s been played on me for years…..and has set me back several years.

I’ve been blogging since November 17th, 2004.  That’s TEN YEARS.  I was the first person on the internet to publicly post my personal finances for all my small businesses, and was open about who I was.

Albeit I never started NevBlog.com with the intention of a single person to read it and never had the intention of making it a large blog, it’s almost ridiculous that my following is not FUCKING HUGE.

And here’s one of the most wasteful and regretful pieces of non-action I’ve ever done:

I failed to collect the email address of readers.

Doesn’t seem so bad right?
Well lemme explain why I would love to go back in time and PUNCH 21 years old Neville in his big nose (who apparently had $16,721 in the bank at the time).

Here’s what happens when you spend lots of time on blog posts and stick them up on the internet randomly:

You basically hit “publish” and hope people come to your website.  For years this is all I did.

When I was a really active blogger my site would get like 2,000 unique people a day coming to it…..but I NEVER once had a strategy on how to get those posts out there, or keep people coming back.

I had a ton of friends in marketing, but none of them convinced me to start collecting emails quite like Noah Kagan did.

Everyone said it was important, but Noah viewed collecting emails as THE NUMBER ONE METRIC he went by.

And it’s because of a chart that looks like this: 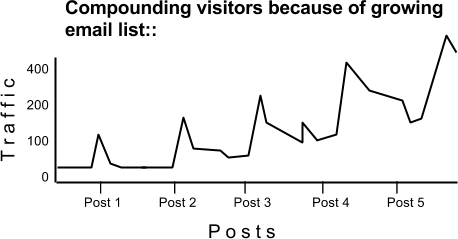 You see, if my stupid 21 year old self had put a “Signup by Email” box somewhere on NevBlog.com, everyday I would’ve collected a minimum of 10 and 30 emails per day with the traffic I was getting.  That’s conservatively 600 people per month who wanted to hear from me.

And if 21 year old Neville HAD done this, then every time I put out a new blog post, I could hit up those 600 people via email saying:

“Hey, I did this thing where I got a homeless guy to sell bottled water on the side of the road, and we sold all 24 bottles in under 30 minutes!  Checkout the blog post here.“

Basically thousands of visitors would find out about my new post that same day.  Driving hella traffic to the site.  And since the email list and traffic would continue to grow together, it would create a “compounding traffic” effect in the long run.

So a happy APRIL FOOLS to current-Neville on missing out on tens of thousands of free subscribers & sales!!

Your business homework for tonight:
Make sure somewhere on your website (personal or business) people can signup to get more information/deals/updates from you.

Keep in mind, even though the new owner of my former business HouseOfRave.com does a horrible job with the site, this crap-ass email form still gets him an average of 3 new signups a day:

So even a poorly-executed version of an email signup will help build your business for free.  You don’t even have to be emailing on a regular basis right now….just get the damn form up today!!

P.S.  This kid Bryan Harris is doing all this stuff VERY correctly right off the bat, and already his blog is exploding.  Just two months into starting a blog, he makes $1,500+ a month from his new email subscribers automatically (which 21 year old Neville would TOTALLY be jealous of)!  I’ll feature a post about how he did this tomorrow.  Stay tuned homie.

P.P.S.  Do you have some sort of email collection thingy on your website right now?  Post a link to it in the comments, I’m curious to see it.  If you’re feeling bold, I’d love to hear the number of signups you get per day!