The first & last time I blatantly stole something was in 2002 when I was buying a bag of Whopper’s candy at the University of Texas convenience store before a class, and the line was gargantuan.

Running extremely short on time, I sneakily walked out with the 85 cent bag.  I felt terrible.  After the class finished, I went back to the convenience store, checked out and paid for another bag of Whoppers, then put the bag of candy back in it’s original place in the store.

Net harm to the store = ZERO.

Weight it had on my conscience = IMMENSE.

An $0.85 bag of Whoppers nearly crushed me, so I was horrified I had actually stolen a bike.

…and it was a NICE bike which someone obviously put a lot of work into.  It was a “woody” looking bike with a custom paint job, hand-made wood-lined rims, reinforced and upgraded parts, and a gigantic lock chain that just screamed, “THIS BIKE IS REALLY IMPORTANT TO ME…PLEASE DON’T STEAL IT.”

It was Friday evening and me and friends were at a fun tech meetup, seeing old friends and making new ones, then we all left to have a pre-party at my place (which is conveniently located Downtown).

We were all drinking and went out to a big club known for cool people and fun dancing.

Sometime around 2am (when all the bars/clubs here close), I was under the impression the club was giving away a bike.  There happened to be a nice bicycle in one of the rooms of the club that looked like it was being “presented”…and someone told me it was a promotional bike they were giving away (I have no idea why I thought or believed this…I’m presuming alcohol played “a small” factor).

On a lark, I decided it’d be funny if I got the “promotional bike” outside the club and started riding around on it….well, I accomplished that goal!

Then I saw my friends walking home and got distracted, so I went with them (still riding the bike).  We walked three blocks back to my place where my roommate asked, “Ummm…where’d you get this bike??”

I explained it was a promotional bike giveaway, and I “accidentally” rode it home (I never meant to ride it more than a block away).  I somehow didn’t feel that guilty since it was going to be given away anyway.

I put the bike in my closet for the time being (we were about to have a small after party), and finally saw it under proper lighting: My roommate exclaimed, “This is SOMEONE’S bike….it looks used and even has a lock on it.”

I couldn’t really argue these obvious statements, and quickly realized I was some douchebag who just stole a bike!

…a petty little thief I was.

I woke up extra-early the next morning and searched for the owner through Twitter (maybe someone Tweeted “my bike got stolen from Barbarella” or something along those lines)  and through the bike model number etc.   I then posted this in the Lost & Found section of Craigslist to find the owner: No responses, so around 3pm I rode my own bike past the club where my stupidity occurred (for fear of being spotted on the stolen bike), and found some guys inside working on the club.

I asked, “Did someone here get a bike stolen last night?”

Them: “YES!  One of our guys got his bike jacked…like a wooden-looking bike.”  <– (said sort of angrily)

Them: (suspiciously) “What do you mean you have it?”

Me: “Last night I was walking back to my place, and some guy walking by me said, “Here man, have a bike…I jacked it from Barbarella” and then ran off!”

Them: “That’s crazy….must’ve been some crack head or something.”

Me: “It might have been” <– masking the guilt in my voice.

Them: “Oh man, thank you soooo much!  That’s a really good thing you did, he’ll be so happy to see it.”

I left sort of laughing how I stole the bike in the first place, yet am the hero for giving it back!

Here’s me right before I rode it back: I rolled up with the bike, and was welcomed like a savior.  They even gave me a personal day-time tour of the club, showed me how they made their new 1920’s-style room, invited me to an event that night (free of charge for their hero of course) and apparently they had a closet full of…soups…(??)…they were trying to get rid of and offered me all of it.

They even started pouring me some scotch to toast the return of the bike (I declined simply because I didn’t want to be drunk at 3pm)!

So I walked out of the club glad THEY DIDN’T BEAT ME UP for stealing a bike….. and with two cans of soup :-) I’d really like to think I learned something from this incident, but I was actually REWARDED for stealing then returning something.

So the moral of this story is: Steal a bike and get free drinks and soup!

…keep snapping pictures of him while he’s working at my apartment! I currently now have FIVE different methods of getting around: …and now the newest addition to my fleet of transportation… But wait…I get to drive around this sexy beast, but I didn’t BUY it.

Car2Go’s are an experimental transportation system that are available in 3 places:

Basically it’s 400 Smart Cars scattered randomly through the city.  If I see one, I can freely hop in, drive away, then leave it wherever I want!  EVERYTHING is included in the price….gas, insurance, parking etc.  All you need is a little member ship credit card thingy to access all the cars.

It’s like using a car only when you need it….but without having to return it to a rental place.  The cars are tiny, and you can park them pretty much anywhere, even nose-first style. I’m nearly as big as the whole car! I can easily wrap my arms around the width of the Smart car: This is how I parked one night…no parallel parking needed! 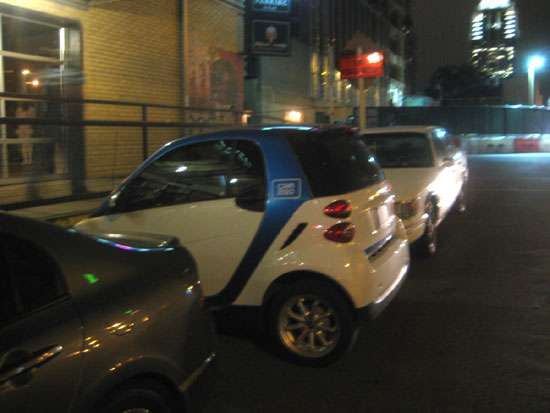 Big pimpin’ in one of the Car2Go’s laying around on the street before a quick spin: Now it’s cool to just stumble around and find one of these, but if you need help, there’s a free Car2Go iPhone app that locates every available Car2Go around you.  It will even tell you fuel levels, how clean it is or if it has any damage.  There’s roughly 400 of them humming around the city: The test drive was fun, and I know several friends who’ve essentially stopped using their cars because they use these so often.  What a useful concept!

Previously when I would “try and eat well” it would always be destroyed over the holidays.

So this year I decided to think about this in advance and solve it…and it worked beautifully!

There was a Zoroastrian Congress in Houston over the holidays where all my friends and family would be.  It took place at a hotel, which ensured I’d be eating out all the time and have plenty of chances and excuses to eat like crap.

It’s easy to think, “It’s the holiday, I’ll just indulge a little”….but I KNOW the end result is being sluggish, feeling fatter and finding it hard to wake up etc…

So for the weeks prior to the holiday I began tracking my meals like I did during the 6-pack experiment.  I didn’t necessarily give up ANYTHING…I simply ate good, not bad.

I made an old piece of cardboard into a “tracking chart” starting two weeks before Christmas.  Everyday I was to write down everything I ate on a little sheet of paper (which I carry in my pocket), then post it on the board at night: In around two weeks the chart was full: I actually filled up BOTH sides of the cardboard, for 20 full days of tracking: It’s amazing how just being conscious of how much you’ve eaten for the day keeps you on track.

Here were some of my eating habits during my hotel stay:

Since I was eating so well, the tightly packed schedule during the holidays was much easier.  I could wake up easier, recover from drinking much quicker, and just in general feel good instead of weighed down….all by simply writing down what I ate!

A new year, and time for new goals.  I’m not 100% what my goals for the whole YEAR will be, but I can show you my current January 2011 goals which sit on my desk: Something I’ve found VERY interesting is the amount of time it takes to form a habit is NOT one month.

This means all my goals or experiments which I try for one month generally don’t stick.  During my six-pack experiment I realized one month was great, but I should keep eating well for at least 3 or 4 months.  When it was officially over, I have since kept up that eating habit as a LIFESTYLE instead of a temporary diet.  Even through holiday seasons such as Thanksgiving and Christmas and New Year I still ate extraordinarily well (seriously, call Adam at MyBodyTutor if you’re serious about implementing this change).  This was because of the sheer length of time I implemented the “experiment”.

So my first goal this month is great HouseOfRave.com customer service with a focus on further reducing it (I reduced it by over 50% last month..DURING THE FREAKIN HOLIDAY SHOPPING RUSH)!

…even on my December 2010 goals this customer service goal was a major component.  I’ve seen the great results from it, so I want this to become a habit and focus, and therefore I plan to have this goal around for about 3 months.

The next two I can’t openly discuss on this blog.  Well…I CAN…but I don’t want to, even though it’s really interesting :-)